For the second time in four days Banstead and Guildford battled hard in matches that both came to tense conclusions.  In the league during the week City had won the game with a goal deep in stoppage time, whilst this FA Vase tie saw a late Banstead come-back and a resulting penalty shoot-out. Banstead’s starting line-up included only four players who had started the midweek match. For City new-signing Greg Haydon came into the defence, whilst Cyril Ocansey and Mike Coppinger came into the starting eleven from the bench.

Early uncertainty in defence gave Banstead an early chance on goal when a direct free kick curled just wide. Before play had settled City were forced into a substitution when Luke Beale limped off to be replaced in the heart of defence by David Burton. Chances at either end were limited but City should have taken the lead when Jamie Higgins put Andre Smith into a good position, but his powerful effort sadly went well wide of the target. On the half hour Banstead had their best chance of the half but Zack Basey saved brilliantly left-handed and the ball was cleared. Guildford had a good spell late in the half. Theo Woodhouse’s shot forced keeper Bill Wilson into a diving save, Cyril Ocansey missed the target with a header, and Athan Smith-Joseph saw Wilson save comfortably.

Immediately after the break the home side had a great chance to take the lead as twice Guildford’s defence summoned up miraculous blocks. Minutes later City edged ahead. Cyril Ocansey’s pace took him clear down the right. Cutting into the box his first effort was blocked but reacting quickly he smartly put the rebound beyond Wilson and into the net. Banstead’s tactic during the second period was to fire countless long balls down the pitch with the aid of the wind. To their credit the defence dealt manfully with this direct approach. For City, Ocansey and Andre Smith both saw shots go wide but pressure was eased on 75 minutes when City took a two-goal lead. A long throw was cleared to the edge of the box where Greg Hayden headed it back into the danger zone where Nathaniel Williams was able to divert the ball beyond the advancing Wilson. In a last attempt to salvage the game Banstead’s barrage intensified. That said they got on the scoresheet on 83 minutes from a superbly struck free kick by Alex Filipe. Filipe later shot wide, whilst from a deep free-kick Banstead headed over at the back-post. In stoppage time Andre Smith lobbed just wide from long range. But there was still time for Banstead to draw level. In 90+3 a home side corner was allowed through to the back post where it was headed home.

So, the encounter moved straight to a penalty shoot-out. The first four kicks were all scored: Josh Everard and Andre Smith netting for City. Both sides missed their third kicks. Mike Coppinger then scored for Guildford, and Banstead’s fourth effort was well saved by Zack Basey. So Athan Smith-Joseph stepped up with victory in his hands. Smith-Joseph kept his cool and netted and City’s players and travelling supporters celebrated advancing to face either Abbey Rangers or Westside in the next round. 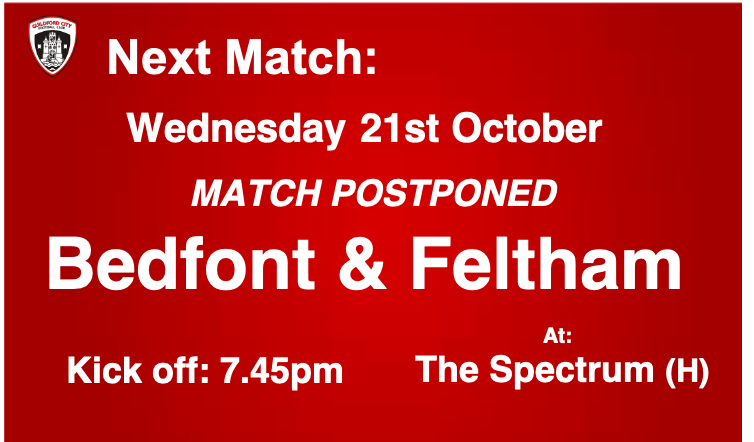