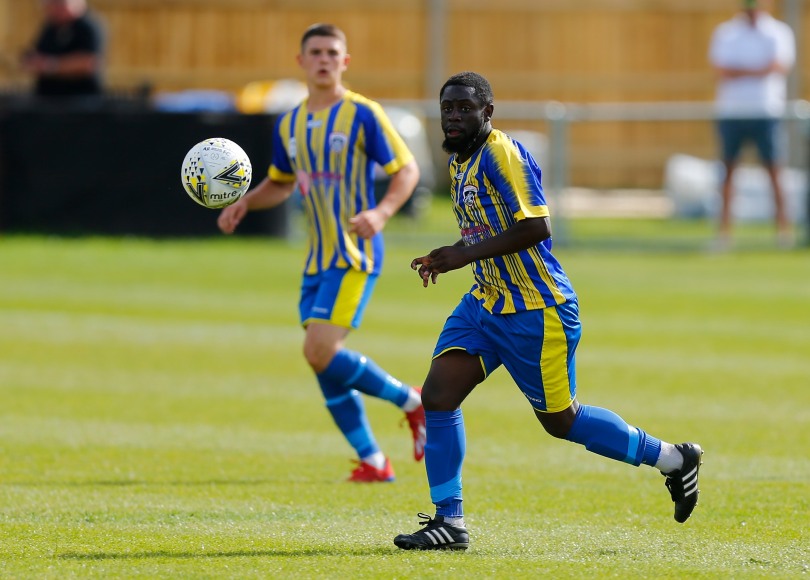 The ups and downs of football!  In midweek a superb City performance saw previously unbeaten Ascot put to the sword, whilst days later here in the rain at Hounslow the team fell to a frustrating defeat. In the first half Guildford maintained their sprightly form and certainly felt aggrieved at one or two crucial decisions from the officials.  But Hounslow, who play a good brand of football themselves, were dangerous on the break and City’s backline didn’t look secure throughout the match. After the break a third goal from Hounslow caused the visitors to become frustrated and the game to become ill-tempered.

Twice in the early minutes City’s Dan Stewart broke through on goal and on both occasions he was adjudged offside in what must have been incredibly tight decisions. On 13 minutes with their first meaningful attack Hounslow broke quickly down the left. The ball was squared to the back post where Trent Skapetis found the corner of the net. City were still threatening and on 20 minutes another tight offside decision denied Cyril Ocansey as he went through on goal. To rub things in Hounslow broke away again two minutes later and Shakeel Morris coolly rounded Zack Basey to slide the ball home.  Being 2-0 down after a promising start wasn’t in the script, and the City players were becoming frustrated as decisions seemed to be going against them, shown again when Eli Ogunseye skipped through the defence and appeared to be buffeted from behind. Ogunseye commendably didn’t go down but the contact was enough to negate the threat to goal and the ball was cleared. It was all Guildford at this stage. Ogunseye saw a shot saved for a corner, and another at close range saved by the keeper’s outstretched leg. On 35 minutes City gained a lifeline when ironically they gained a fortuitous penalty for handball. Up stepped Dan Stewart to net for his eighth goal of the season. Still Guildford went forward. Cyril Ocansey forced Forster into a flying save and moments later Ogunseye’s shot was blocked, followed up by Dan Harding shooting just over the bar.  In the halves final moment a glorious piece of football on the edge of the box led to Dan Harding’s powerful shot being excellently saved.

Given City’s display in the first period hopes were high for the second half. But Hounslow shouldn’t have been underestimated. Three times in the opening minutes Hounslow had chances on goal with Zack Basey especially instrumental in keeping the ball out. But on 51 minutes any lessons hadn’t been learned and a ball in behind the defence caused problems. This time Basey could only parry the shot and Shakeel Morris was on hand to side foot home. On 58 minutes City came close to a second when an arcing run from Dan Stewart saw him attacking the goal from the right. His pass cross the box to Cyril Ocansey got enough of a defenders touch to prevent a final goalscoring touch.  The atmosphere of the game became feistier as the match went on as players became more frustrated. With five minutes remaining Hounslow hit the crossbar with a delicate lob. For City late efforts from Kieran Campbell and Wayne Ridgley went wide, as did Campbell’s stoppage time shot following an indirect free-kick.