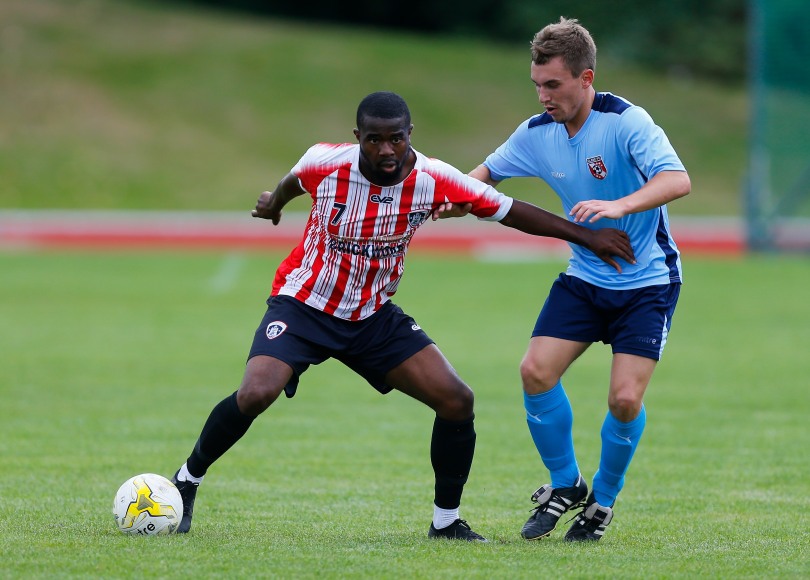 Guildford crashed out of the FA Vase in disappointing fashion at the Spectrum, being beaten comprehensively by Kent based Glebe FC. City were purveyors of fine attacking football during pre-season but now we are down to the serious business things aren’t flowing as they might. Having lost in the FA Cup the previous week, the club for the second consecutive year has exited early from the FA competitions. Guildford were lively in the opening moments. After just two minutes they should have scored when Cyril Ocansey’s shot from close range was saved by keeper Nick Blue’s legs. Gradually the opposition came into the game, although Stefan Joseph felt he was bundled off the ball in the penalty area on 21 minutes. Immediately the ball was moved quickly to the other end and bizarrely Glebe were only prevented from going ahead when a goal bound shot hit a Glebe player on the goal line. It was no real surprise when Glebe did go ahead on 35 minutes. Billy Irving who was returning from injury was muscled off the ball, and when the cross came in Anthony Dwyer made no mistake from an acute angle. To add to City’s injury woes Leavan Sullivan limped off just prior to the interval to be replaced by Shaun Smart.

Guildford also opened the second period well and hopes were high for a recovery. On 53 minutes from Cyril Ocansey’s excellent cross, Ben Cotton made good contact but the ball brushed the top of the crossbar and went over.  Minutes later Guildford felt they had strong claims for a penalty when a player went down in the box but referee Rado Iliev was close at hand and play was waved on. On the hour the match was in truth decided.  A chance to clear the ball was missed after which the ball was played across goal to Billy Craske who picked his spot from 15 yards. A third goal came on 77 minutes when a defender was turned and with the defence cut open the imposing figure of Jack Harris put the ball in the net.  Late substitutes Wayne Ridgley and Kiyanu Pillay gave promising cameos as City tried to grab a consolation. Dan Harding and Benga Ogunseye shot wide late on, whilst in the dying moments Benga skewed a shot wide from an acute angle.