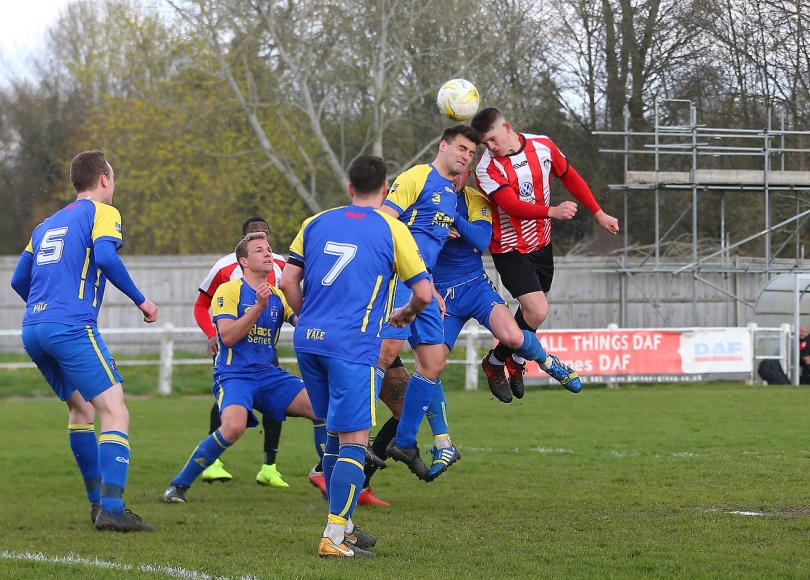 After two quite brilliant wins against Balham and Sutton Common Rovers, Guildford couldn’t create the same level of intensity in this game. It seemed strange as I would have thought that Guildford would have come flying out the blocks, but the first goal came really early and it seemed to make Guildford lose all their confidence. In just the 2nd minute, Raynes Park Vale won a corner and although not a very good delivery, it still caused a lot of confusion in the Guildford City box and several chances for Guildford to clear their lines was squandered. The ball eventually fell to Ato Okai who acrobatically threw himself at the ball and it flew into the top left corner of the net. It was therefore a terrible start for Guildford City. An awful lot of controversy was present in this game once again as many decisions seemed to be a little odd to the supporters that came to watch the match. Emotions between the two teams ran very high throughout this match with many instances of rash challenges and aggressive behaviour shown towards opposing players. The best chance of the whole game for Guildford came in the 18th minute when Eli Ogunseye won a free kick after he was pushed to the ground. Bobby Webbe stepped up to take the free kick and whipped in a delicious ball that Stefan Joseph met powerfully, but he was extremely unfortunate as he saw his effort bounce off the bar before being cleared. Raynes Park Vale doubled their lead in the 31st minute. A man of the match performance last week but for a goalkeeper people often only remember the last game, and on this occasion Stuart Norman fumbled what seemed to be a tame cross and then in the confusion pulled back a Raynes Park Vale player in the box and a penalty was awarded. The penalty was converted by Jordan Holmes and that proved to be the last goal of the game.

The second half started and it seemed to simply be a midfield battle as the ball was held in the centre of the pitch for vast amounts of the second half. Few chances were created during the second half at either end although in the 64th minute, Bobby Webbe pulled a fine save out of the Raynes Park Vale keeper as he struck a rolling ball brilliantly from outside the box. Ato Okai was then put clean through in the final moments of the game and he seemed certain to put the game to bed but Stuart Norman rushed out and saved well to keep the score at 2-0. Neither team truly deserved to win this match although Vale’s more direct approach on the difficult surface just gave them the edge, but essentially it was just two lapses of concentration from Guildford that cost them the points today.