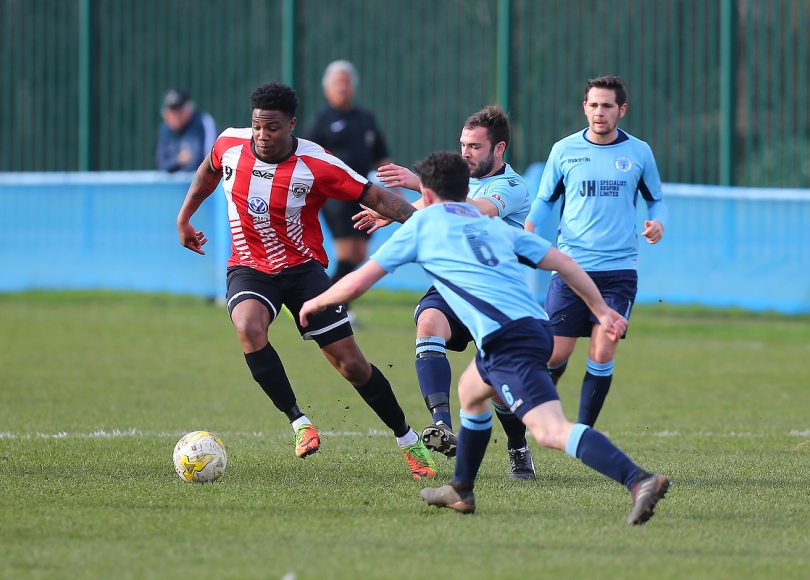 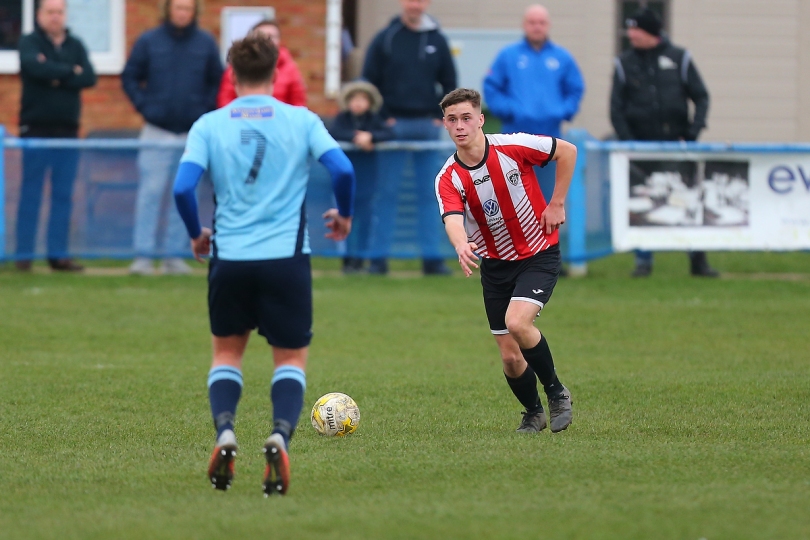 Guildford City had dipped out of form going into this game, losing two on the bounce to Walton & Hersham and AFC Hayes. Kiye Martin and Dan Stewart returned to the club temporarily as part of an attempt to bolster up the midfield, an area for Guildford that had been weak in recent games. Lots of effort was shown in the early stages of the match but no real signs of true quality as both teams struggled to hold possession. First signs of danger for Spelthorne came in the 22nd minute as they gave away an unnecessary free-kick just outside their own box. Kiye Martin was the man to take it and he whipped it up and over the wall and it seemed destined for the top right corner, but the Spelthorne keeper did expertly well to get his fingertips to it and pushed it out for a corner. The ensuing corner was easily cleared by the Spelthorne defense. 10 minutes later, Eli Ogunseye drove down the right and was fouled. Kiye Martin once again stepped up to take the free kick and after David Burton missed his header it fell to Kyen Nicholas who squandered a golden opportunity.

In the 36th minute, the first goal of the game was scored and it was a cracker. Guildford won a throw-in deep inside Spelthorne territory on the right hand side and it was headed clear to the edge of the box but Dan Stewart waited for it to drop and timed his effort perfectly, as he arrowed a thunderous volley into the back of the net. Guildford went 1-0 up. Five minutes later, Luke Beale was far too reckless inside his own area as he connected with Spelthorne’s Joshua Toya-Nyero instead of the ball and a penalty was awarded. Lewis Flatman stepped up for Spelthorne and converted from the spot. Just before the end of the first half, there was a tussle between Kyen Nicholas and a Spelthorne defender and Kyen Nicholas eventually wrestled him to the ground. He was given a yellow card, with home fans in the crowd believing he should have got a red. All square at the break.

The second half began and there was an early clash of heads between a Spelthorne midfielder and Billy Irving and play was stopped for a lengthy amount of time as Irving required stitches. Quite understandably, he was unable to continue and was replaced by debutant Dominic Easton. In the 54th minute, Sean Mason failed to deal with a floated ball into the box and it fell to Spelthorne’s Billy Frost whose powerful effort was saved by Stuart Norman but he had parried the ball right into the path of Lewis Flatman who rifled it in to the top right corner to put Spelthorne 2-1 up. Once again, Spelthorne’s speedy attackers earned a penalty when David Burton was adjudged to have brought down Joshua Toya-Nyero as he knocked the ball past him. Luckily for Burton, the ensuing penalty was saved as Stuart Norman got down low to his left and pushed the ball out for a corner. However, Guildford did end up going 3-1 down. Spelthorne cleared the ball up field and it split the Guildford City defense wide open, a Spelthorne attacker ran clear and knocked it past Stuart Norman, who had charged out of his goal, into the back of the net. Leading up to Spelthorne’s third goal, Eli Ogunseye had seemed to be fouled and Chris Balchin in his technical area was furious that the referee hadn’t awarded a free-kick. In my opinion he was right to be angry. However, he had crossed the line and the referee sent him from the bench. Spelthorne saw the rest of the game out comfortably as both teams seemed to accept the result. Apart from the goal, Guildford City didn’t create many chances to score and the players appear to have lost their confidence. Guildford City thus fell to another disappointing defeat on another frustrating day for the club.