Abbey went to the top of the Combined Counties table with a comfortable win over Guildford City at Addlestone Moor. Guildford went into the game in a confident mood after three wins in their previous four matches. Indeed City opened this match brightly and for the first 15 minutes they took the game to the home side, playing some enterprising football in the progress. A number of times the ball was played into the box without fashioning a clear opening on goal. Guildford were made to pay when with their first real attack Abbey got on the scoresheet. A low cross from the right found Sean Bradley at the far post who bundled the ball home at the second attempt. Sadly after their bright start the City players heads seemingly went down having conceded the first goal. The momentum of the game changed quickly and Liam Beach had to save well from a volleyed effort. On 20 minutes Alex Hendrie found himself in acres of space in the right channel and he had time to lift the bouncing ball over Beach and into the net. On the 30 minute mark Abbey went three ahead. Liam Beach twice saved as the ball ricocheted around the box before Spencer Maw eventually put the ball in the net. 15 minutes of defensive madness and for Guildford the game was all but gone. For the remainder of the half Guildford consolidated, and just before the interval David Burton nearly got on the end of a fine move.

Manager Chris Balchin made a double substitution at the break in an attempt to get back into the game; Robbie Mundow and Bobby Dormer entering the fray. Liam Beach saved well within minutes of the restart but the second period from both sides was a more laid back affair. Guildford enjoyed good possession but it wasn’t their day in front of goal. Robbie Mundow saw a 30 yarder go wide, as did Dan Stewart’s shot from a free-kick, whilst Evan Lopes’s impressive run ended with a shot into the side netting. Abbey always looked dangerous breaking and Spencer Maw on the right looked particularly impressive. City still looked for the goal that might spark a revival and on 68 minutes the hardworking David Burton set up Robbie Mundow for a shooting chance that just cleared the bar. City’s best move came on 77 minutes when the overlapping Chris Tancock pulled the ball back for Tariq Straker who screwed his shot wide. Late on a Robbie Mundow shot was pushed over by Liam Stone, and for Abbey late in the game a rebound fell kindly to Bradley Sweeney but Liam Beach saved well to maintain the three goal deficit. 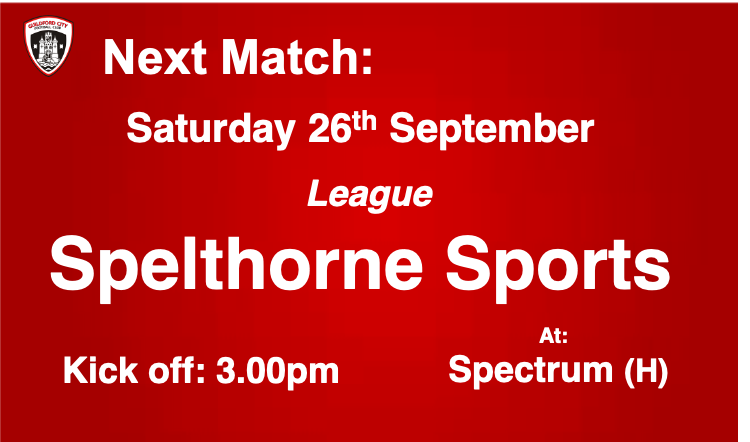