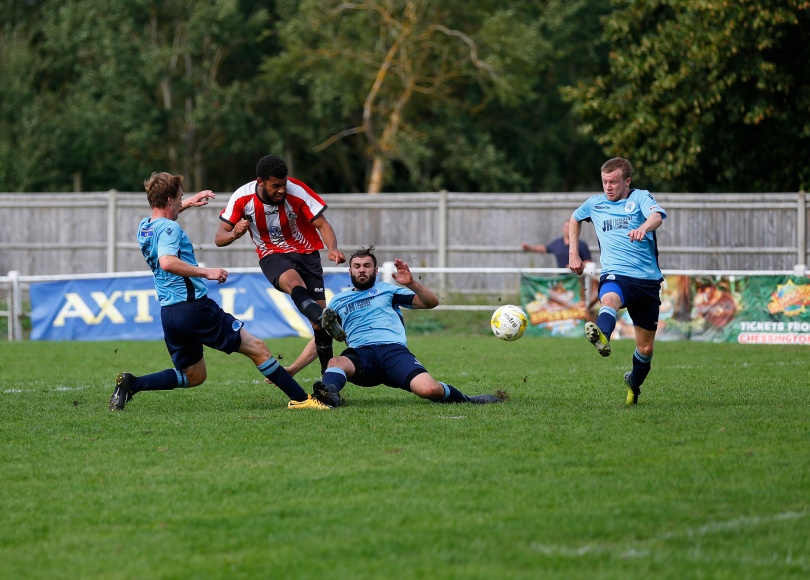 At the ninth time of asking Guildford City finally managed to put one over on their bogey side. Seven of the previous eight games had ended in a City defeat and so this was a sweet victory indeed. Sports went ahead on the stroke of half-time and it had looked as if this match would go the way of the others. However Bobby Webbe’s introduction off the bench on the hour changed the direction of the game, and that together with two moments of quality from Dan Stewart saw the home side come from behind to claim the points.

Much of the opening period was a scrappy affair. The visitors enjoyed much of the possession with a succession of set pieces being fired into the penalty area. For City, a Josh Burrowes run and cross from the right flank just eluded Mark Watkins in the middle, whilst Liam Beach saved comfortably from a Spelthorne header. City’s build up play was too slow meaning that often players were caught in possession. On the half-hour Jake Flatman fired a powerful shot inches over the bar, but it wasn’t until the last minute of the half that the threatened breakthrough came. City’s scrambling defenders conceded a free-kick on the left edge of the box, and Jake Flatman fired a low free-kick past the wall and into the net.

The opening period of the second-half was more of the same. Another Spelthorne shot, this time from Conor Moody, just cleared the bar from range on 56 minutes. The momentum changed with the introduction of Bobby Webbe off the bench on 62 minutes. Within four minutes City had drawn level. In the second phase of a concerted attack, Josh Burrowes crossed to the edge of the area where Dan Stewart expertly volleyed into the corner of the net. Spelthorne did see another long-range effort curl just wide, but visibly Guildford had been lifted by their goal. Bobby Webbe’s 30 yard effort forced a fine diving save from Jake Tayler, whilst on 76 minutes a Dan Stewart effort was also spectacularly saved. It was City who looked more likely to grab the winner and on 83 minutes the goal came. Substitute Tariq Straker held the ball up well before finding Dan Stewart advancing into the box. Stewart did well under pressure to drill low into the corner to the adulation of his team mates. The visitors did push forward in pursuit of an equaliser, but City’s defence held firm under some late pressure. After a lengthy and nervy period of stoppage time referee Al Nayir brought the game to a conclusion with City now sitting in fifth position at this early stage of the season.