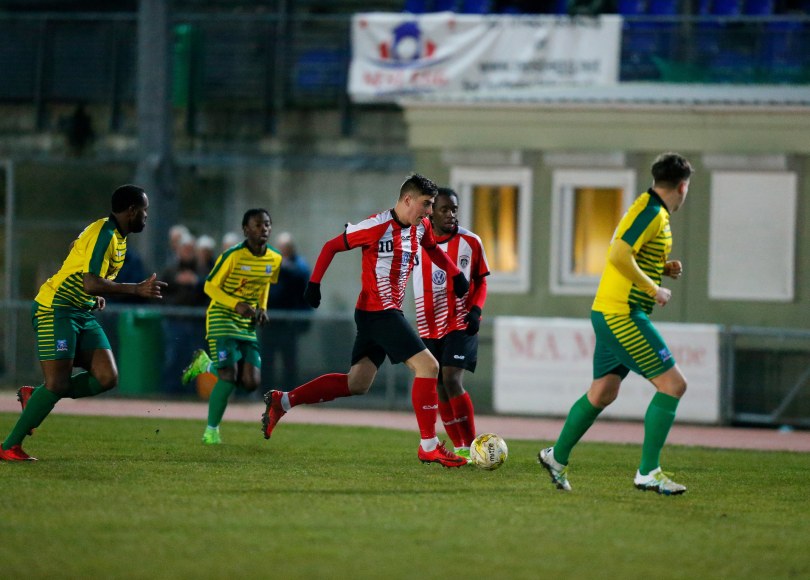 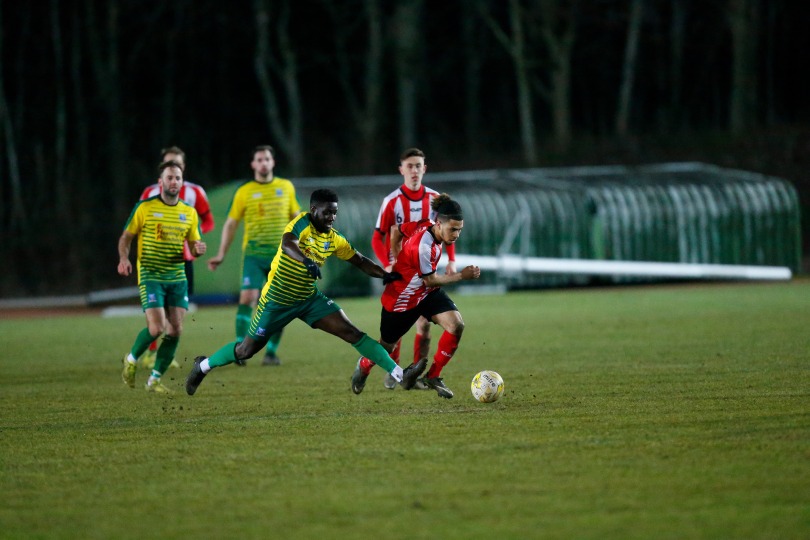 Two weeks ago, Guildford City played a blinder against promotion chasing Sutton Common but lost. Yesterday they faced a fellow promotion chasing side Walton & Hersham and again lost. The results of the two matches were the same but the performances were not. In truth the visitors could have been several goals up by the interval, such was City’s rather lethargic approach to the match. Granted Walton & Hersham played well and former City defender Jamie Thoroughgood, now playing for the Swans, felt afterwards “that it was their best performance for quite some while.” Right from kick-off Guildford seemed off the pace as the visitors hit the ground running. After seven minutes James Simmonds blazed over from a good position from Tinashe Nkoma’s cross and two minutes later they had a strong penalty appeal turned down when Taurean Roberts valiantly tried to stay on his feet after a collision when he might have gone down. Walton won a succession of corners and were dominating the aerial duel in the box. Mo Sampat saved well from one header before Jordan Gallagher cleared off his own goal line from another. As the game neared the half hour mark Sampat again saved well from Karl Parker before at the other end Kiye Martin had City’s best chance of the half. A fine interchange of passes involving Shawn Clement-Peter saw Martin’s shot from an acute angle saved at full stretch by Norris. The rebound fell awkwardly to Kieran Campbell who lost the chance of a shot trying to get the ball on his favoured foot. As the half-progressed Chris Tancock cleared brilliantly off his own line and Walton somehow side footed wide when it seemed easier to score. For City Kieran Campbell saw two long range efforts clear the bar, whilst in first half stoppage Walton did get the ball in the net but the linesman ruled that the player concerned was offside.

Early in the second period City got even in the “should have had a penalty” stakes. Evan Lopes quick feet took him to the by-line where he was bumped over. The referee visibly considered but eventually ruled no foul. Minutes later Walton deservedly took the lead when Taurean Roberts cut inside the box to plant a shot past Sampat and into the corner. Guildford now had it all to do and for a period they looked in danger of collapse as Sampat saved twice, and Chris Tancock cleared off the line again. On 65 minutes Walton made the game safe, City’s overstretched defence allowing Roberts time and space in front of goal to tuck the ball home. With fifteen minutes remaining Thoroughgood hit the crossbar from a corner and the ball was cleared, and City captain Nemo Adams made a tremendous last-ditch tackle to prevent a shot on goal. Guildford twice came close to a consolation in the closing stages, and both chances fell to Jordan Gallagher. Firstly, his chipped effort was too heavy and cleared the bar, and then deep in stoppage he did well to manoeuvre in the box to find space for a shot which was saved low down by Norris.