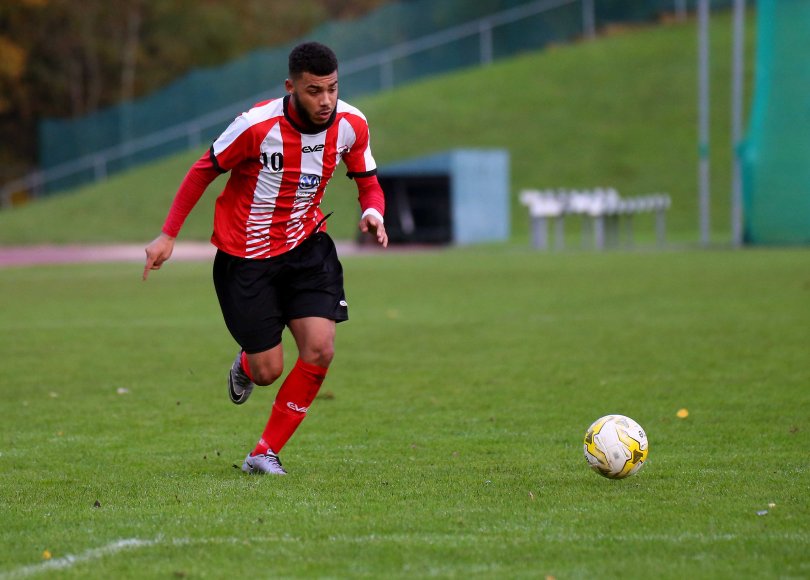 In the cold light of day Guildford City will rue not taking early chances that could have clinched a third consecutive victory. In a thrilling first half play continually swept from end to end. Defence was at a premium and with five first period goals scored there were bets being taken as to how many further goals might follow in the second period.  In the event, and sadly for the home side they seemingly put the cue on the rack and failed to significantly trouble United’s debutant goalkeeper after the break. Former City striker Mario Embalo and Eli Ogunseye used their strength and especially pace to good effect and they performed heroically for the visitors. The pair were a constant handful for the City defence who scrambled effectively for the most part but they will know they have been in a game this evening. In front of their lowest crowd for some six years City came out like an express train creating four good opportunities in the first ten minutes. In the very first minute fledgling keeper Claudio Boakige miskicked a clearance to Jordan Gallagher whose first time effort lacked power and was saved. Two minutes later a delicate Gallagher pass found Mark Watkins who rounded Boakige but his goal bound effort from an angle was blocked at full stretch by the covering Cedric Abraham. Another Gallagher pass put Dan Stewart through but Boakige was equal to the task saving well. From a corner Nemo Adams saw a close range header saved again. Boakige’s handling looked insecure but he was at least effective in keeping the ball out of his net. So much action early on and on 11 minutes United had their first sight of goal. David Opoku lost the ball on the edge of his own box but Mario Embalo’s effort was well saved by Kornel Ziobrowski. Guildford’s early dominance paid off on 17 minutes when Boakige failed to hold Mark Watkin’s free-kick and Robbie Mundow won the race to nudge the loose ball over the line. Relief at gaining reward for their attacking play was soon tempered when United got back on level terms. Nemo Adams did well to initially intercept Eli Ogunseye’s low cross at full stretch. The loose ball popped up and Mario Embalo was on hand to volley home impressively. That was the impetus the visitors needed and within minutes Embalo forced Ziobrowski into a flying save, followed on the half hour by Jake Hill who saw a thumping long range effort just clear the bar. Such was the flowing nature of the game that City themselves came back with good opportunities. Jordan Gallagher hit the post from close range and although Mark Watkins netted the rebound his effort was ruled out for offside. On 34 minutes the visitors went ahead. Josh Kaddu found himself in acres of space in the left channel and although Ziobrowski saved his first attempt the rebound fell kindly and Kaddu side footed home. For a neutral it was highly entertaining fare. On 37 minutes some nice football between Jordan Gallagher and Robbie Mundow was rewarded when Dan Stewart drilled a low shot on the turn under Boakige’s body. Two minutes later a deep Mark Watkins’s cross was duly converted at the far post by Jordan Gallagher to give City a 3-2 interval lead.

Hopes that the second-half would continue in the same entertaining vein proved unrealistic. As the temperature dropped the game became scrappier. United still looked lively on the break and City’s defence resorted to sitting deep and too often failing to clear their lines effectively. Several times Mario Embalo outmuscled City defenders and several times he won balls he had no right to. On 56 minutes United equalised in an unusual manner when Dan Hughes corner kick sailed straight into the net. City keeper Kornel Ziobrowski felt he had been impeded but the goal stood. Not surprisingly the sting went out of United’s play after 65 minutes when the experienced Theo Woodhouse was dismissed for an off the ball incident. Dan Stewart saw a volley from the edge of the box go wide whilst several late crosses caused some anxiety but were cleared. In the end few would argue that a draw was the right result, although City will be rueing not making the most of their early dominance.