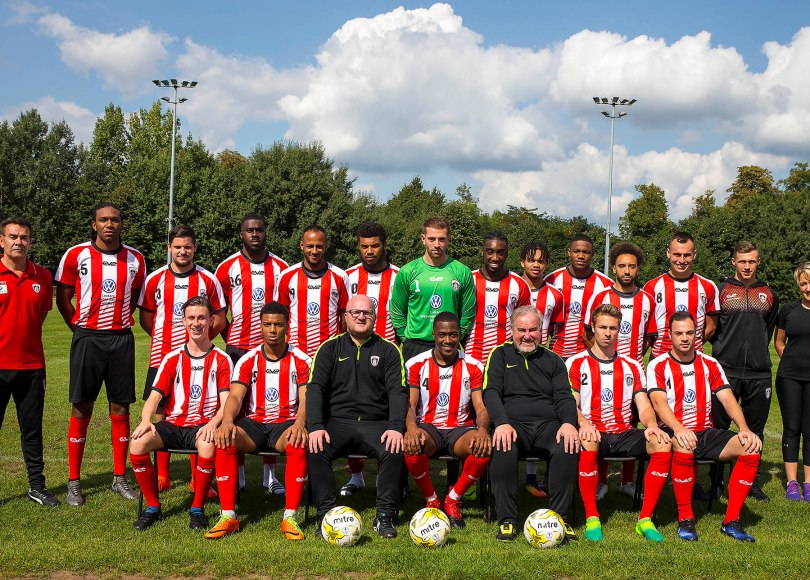 Guildford City’s interest in this season’s CCL Premier Cup competition ended last evening at Redding Way, with Knaphill gaining their second cup victory over the visitors in just five weeks. It was a decent evenings viewing for the spectators, and a decent evenings work for Knaphill centre-forward Danny Taylor, whose hat-trick of goals won the game. Taylor is quite probably the fastest player in the CCL, and his pace upfront was a constant threat to the Guildford back-line. City for their part didn’t play badly and they were very much in the game for 75 minutes. Too often the final ball wasn’t the right option, or the cross into the box was just behind an on-rushing attacker. Typical of their luck in front of goal City had a great chance just four minutes into the match. Following their second corner of the fledgling game Dan Stewart’s shot from outside the box went straight to the feet of Nathaniel Williams just five yards out from goal. As he struggled to get the ball from under his feet any touch at all would have taken the ball into the net. But it wasn’t to be and new Knaphill signing Aaron Bufton was out quickly to smother the loose ball. Bufton might have been excused a bit of weariness during the evening as he had been present at the birth of a baby daughter earlier in the day. Two minutes later the home side had taken the lead and unfortunately it was with a fair degree of assistance from the visitors. A high ball was headed back to Luke Badiali by the City backline, but this overlooked the pace of Danny Taylor who reached the ball first and had the simple task of side footing home. Guildford looked dangerous counter-attacking and they came close on 10 minutes when Jordan Gallagher reached the by-line and pulled a low cross along the six yard box just beyond Kieran Campbell. From another break City drew level on 16 minutes when Campbell ran at pace into the box before being brought down by the advancing Bufton. The referee immediately pointed to the spot and up stepped Kieran Campbell to smash home his 15th goal of the campaign. On the half hour City’s injury woes increased with Louie Downey limping off to be replaced by Robbie Mundow. For the remainder of the first period each side had their moments without real drama in front of goal, although Luke Badiali did save acrobatically from an effort just outside the box.

The second-half followed the same pattern as the first. Two minutes in and Dan Stewart shot over from a difficult angle following a corner. On 53 minutes Knaphill’s Jacob McDonald shot just wide, and this action preceded a good period for the home side. City’s Luke Badiali saved well a minute later, and a further minute on Jimmy Norman was brought down in the box. The same player stepped up to the spot but Luke Badiali was up to the challenge saving the penalty low down to his right. Guildford should have made Knaphill pay for their miss when minutes later a nicely timed Jordan Gallagher pass gave Darryl Siaw the chance to drive a low cross across the goal but to the frustration of City’s strikers the ball passed harmlessly without a vital touch. Darryl Siaw took the next opportunity to shoot himself and his powerful effort took a deflection into the side netting for a corner. Danny Taylor was a constant thorn to Guildford, and his shot on 63 minutes was well parried by Badiali and Nemo Adams came to the rescue clearing the loose ball. Taylor wasn’t denied long as he outpaced the City defence before unleashing a right foot shot inside the far post. Guildford was unlucky not to draw level on 70 minutes. Robbie Mundow’s effort was saved at full stretch by Aaron Bufton. The ball was dinked back in by Siaw and Kieran Campbell, amongst a mass of bodies, headed home. The referee had however seen an infringement and the goal was denied. As City pushed forward gaps were exposed at the back and Taylor claimed his hat-trick, latching onto a long ball to shoot this time left footed into the other corner. Jordan Gallagher and Jimmy Norman exchanged shots over the bar, and Dan Stewart had a powerful shot brilliantly saved by Bufton. As the game entered stoppage time Luke Badiali saved well again, and in the game’s final moment Darryl Siaw hit the top of the crossbar, an act that was symptomatic of City’s fortunes in front of goal.