After the weekend euphoria of defeating high-flying Bedfont Sports, Guildford City travelled to newly promoted Banstead Athletic and turned in a strangely lethargic performance. Defensively Guildford looked sound enough but going forward they lacked the creativity seen on Saturday and earlier in the season. This was actually the third consecutive away match in which City have failed to score. Credit though to Banstead who as a team committed everything to the cause; harrying, chasing and generally making life difficult for City’s players when they had the ball. The match might have followed a different course if the visitors had accepted a good chance in the third minute. Kieran Campbell did well to dispossess a last line defender. He raced goal wards and got his shot away that sadly found the side netting. Campbell is a talented striker but as happens with all forwards, he is going through a lean spell in open play. Confidence suffers but he just needs a tap in to get him going again. On five minutes the ball was played to Robbie Mundow on the edge of the box but his attempt on goal was charged down. Slowly City’s bright start ebbed away and the home side had the majority of the ball, although for the most part Guildford’s defence looked secure. Ashley Elson did fire wide early on but Banstead’s best opportunity came when a City defender was caught in possession and Luke Badiali had to react well to block a one on one opportunity. On the break City did have their moments in the first period. There were appeals for a penalty when Louie Downey went down in the box but referee Gregory was well positioned to wave the appeals away. After a fine move Robbie Mundow found space to shoot in the box but he elected to tee up a colleague and the chance was lost. On 33 minutes City forged another opening. Marlon Pinder slid the ball across the box from the left to the unmarked Nathaniel Williams whose first time effort cleared the crossbar. Three minutes later City had another opening when from a corner Kieran Campbell was unable to get enough on his header to direct the ball towards goal. In the final moments of the half Banstead themselves twice came close. Luke Badiali acrobatically tipped a long range effort over the bar, and from the resulting corner the home side headed over at the back post.

For Guildford the second-half was a more disappointing affair. Jordan Gallagher and Darryl Siaw entered the fray after 54 minutes to try and inject some spark into City’s play. But Banstead were very well organised and they doubled up on danger man Siaw every time that he received the ball. Indeed such was the ground that they covered you would have thought the home side had more than 11 players on the pitch. The game had all the makings of a 0-0 but on 66 minutes Guildford’s otherwise solid defence made one error and they were made to pay. Billy Frost was allowed to get behind the defence wide out on the right, and the ball fell kindly to Ashley Elson who thumped the ball home from 15 yards. City raised themselves in an attempt to get back into the game. The play was still disjointed but at least they forged some efforts on goal. With 15 minutes remaining Kyen Nicholas turned neatly in the box but his mishit shot didn’t cause Sam Johnson-Freeman any problems. One of several free-kicks was fired into the box by Ben Franklin but under pressure Kieran Campbell was unable to put the header on target. As things became rather frenzied Jordan Gallagher saw a shot deflected for a corner and deep in stoppage time Johnson-Freeman cam out and bravely smothered the ball at Darryl Siaw’s feet. A hugely disappointing performance for everybody connected with Guildford City, including a large travelling support that made up more than 50% of the total attendance. 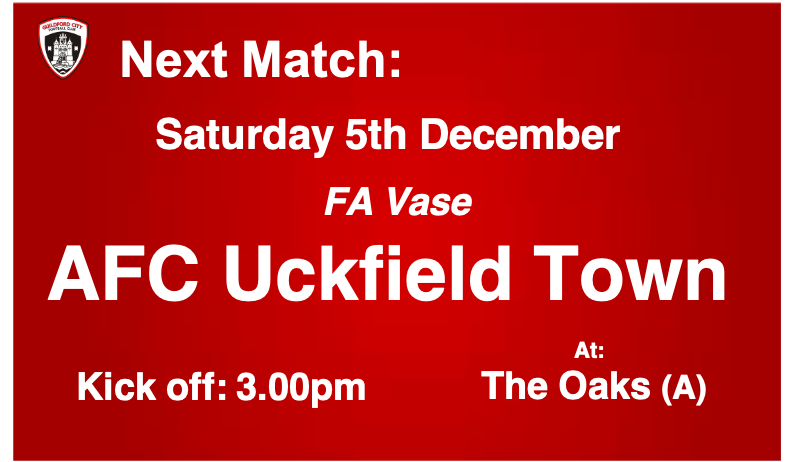