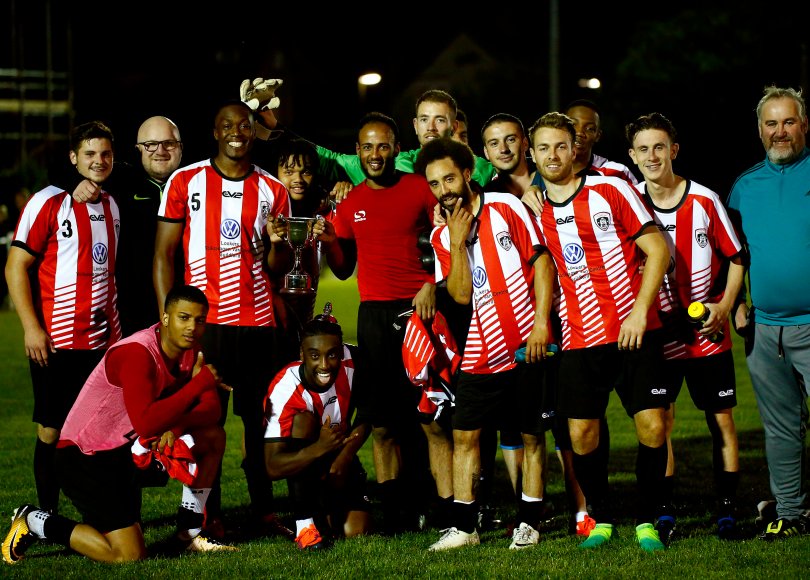 Having already experienced a long pre-season, an early FA Cup tie and a postponement for a waterlogged pitch we are now about to embark upon the Combined Counties League season. On Saturday we visit Alwyns Lane to face Chertsey Town for our opening fixture. Both sides opened their seasons in the FA Cup. City drew 2-2 on the Isle of Wight against Newport in a tense thriller, whilst Chertsey won impressively 3-1 at Spelthorne Sports.

During the 1990’s Chertsey experienced a golden spell in their history. Ex-Arsenal and England full-back Kenny Sansom was amongst several well-known names in a Chertsey side that for several years vied for promotion with the resurgent Aldershot Town. One such encounter in 1993 saw Aldershot fans hire a train to travel to Alwyns Lane in a match watched by a then ground record 1,150 people. Chertsey’s progress continued throughout the nineties and they eventually spent two seasons in the Ryman Premier Division.

In more recent years Chertsey were big rivals to Guildford City, especially in 2010-11 when the two clubs went toe to toe at the top of the Combined Counties table. It was City who eventually came out on top to clinch the championship and promotion, but controversially at the time and despite much work, the Spectrum was adjudged not to be suitable for Step four football. Guildford went on to win the championship again the following year whilst Chertsey Town gained promotion in our stead. Now several years on we both appear again in the Combined Counties League. We also opened the season at Alwyns Lane in 2014-15 in a game that finished 0-0. Last season we visited in October, on that occasion coming away with a 2-1 victory courtesy of goals from Mario Embalo and Shaun Clement-Peter.

Persistent rain throughout the day on Wednesday saw our FA Cup replay against Newport IOW postponed due to a waterlogged pitch. With water gathering on the surface an early decision was made so as to avoid Newport leaving the Island and incurring unnecessary costs. On FA advice the match has now been rearranged for next midweek. Kick-off is again 7.15pm so as to allow Newport to catch the last ferry home should the match go to extra-time and penalties. The winners of this Extra-Preliminary Round replay will be at home to Camberley Town on the following weekend. IF we make progress in the Cup we will entertain Camberley at Godalming Town FC on Sunday 20 August 2017, kick-off at 3pm.