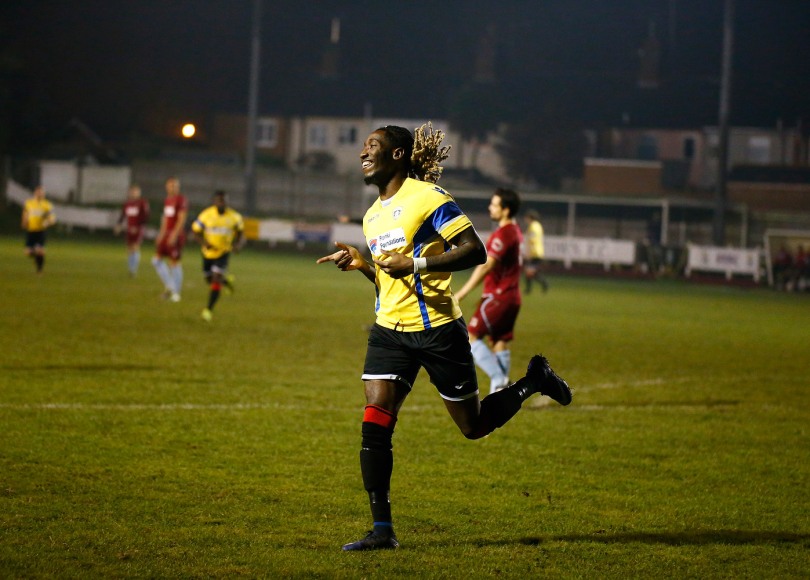 Three weeks ago against Horley Town, Guildford City scored the opening goal of the game 22 seconds after the games opening whistle but yet lost the game 4-1. Last evening at the Memorial Ground an even earlier goal from Shawn Lyle after just 14 seconds set the visitors on course for what in the end was an impressive victory, despite an anxious last minute or so. The early goal came after Shawn Lyle won possession from a loose header and his strength took him past two defenders to shoot past the stunned Ossai. On an uneven surface ball skills were at a premium and there was pushing and probing at both ends. Indeed Matt Petts, playing against his former club, made a fine save on 10 minutes from Elliott Cardona’s snap shot. Minutes later Petts was called into action to bravely save at Jon Lancashire’s feet. Aside from a scrambled effort over the bar two minutes before the interval, that was as close as Farnham got to goal in the first period. City meanwhile, prompted by the impressive Leon Lalor-Dell, concentrated their attacks down the right flank. Lalor-Dell twice in succession spoiled great runs by slicing shots high and wide, but from two of his crosses Shawn Lyle looped a header over and Kiye Martin volleyed into the side netting from an acute angle.

It was Leon Lalor-Dell who carved the first opportunity of the second period. His mesmerising run on the right saw his left foot shot bring a fine save out of Richard Ossai. However within minutes of the restart Farnham were back on level terms. Jack Dillon battled past two City defenders on the right and calmly slotted his low shot past Petts. Guildford looked to respond immediately and Shawn Lyle was just unable to convert Suleiman Djalo’s challenging cross. A minute later Mario Embalo turned smartly on the edge of the box and in a desperate attempt to stop the City striker, Farnham’s Doug Ford brought the City striker down. Predictably Ford was shown a red card and to make matters worse for the home team Leon Lalor-Dell stepped up to delicately curl the resulting free-kick round the wall and into the corner of the net. With Farnham now down to 10 men it was no surprise that Guildford was finding plenty of space in the attacking third. On 65 minutes that man Lalor-Dell again crossed and this time Shawn Lyle was able to find the net by turning and shooting from the edge of the box. Guildford had several chances to add to their lead and crosses from Tom Booth and Jordan Goater flew right across the six yard box just begging to be converted. Substitute Rashid Obbadi also looked lively on his introduction and he twice came close. Then to add extra drama to the occasion Farnham won a penalty in the second minute of stoppage time which was converted by Steve Ramsden. There was still a further four minutes of added time left to play and nerves started jangling in a game that should have seen a comfortable finish. However this time City did hold on to claim a valuable three points.