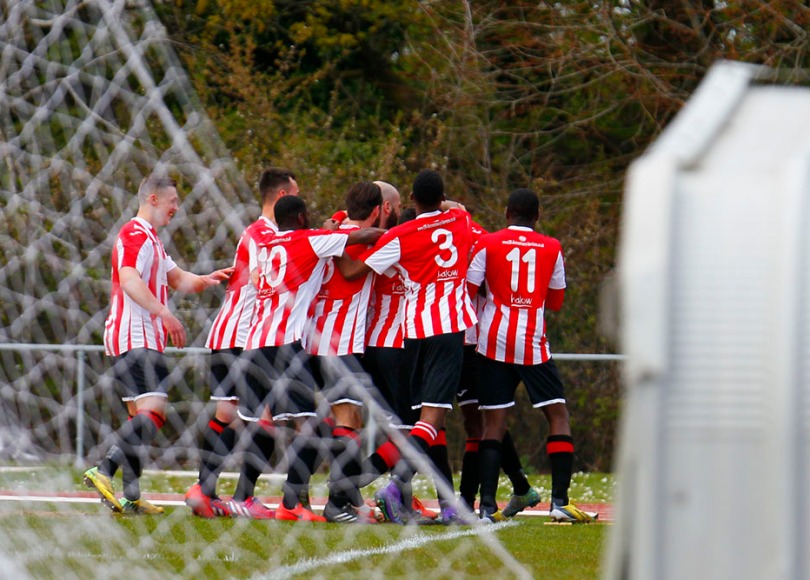 Guildford City concluded their 2015-16 season with a disciplined performance against promotion favourites Camberley Town. In the end it was the visitors who claimed a winning goal late in the game, but City can be proud of their efforts and on another day might just have claimed a point. City manager Dean Thomas chose to negate Camberley’s aerial challenge by playing with a sweeper, and utilising the team’s top scorer Matt Anton as a wing back. The plan proved effective and City’s defence dealt splendidly for the most part with the long clearances forward, and the ever present barrage of Chris Ellis’s quite prodigious long throws. On a relatively rare foray forward it was City who opened the scoring after 28 minutes, and what a goal it was! A deep Sanchez Benali cross from the right was met spectacularly on the volley by Romaric Logon whose shot found the back of the net. Camberley’s equaliser came three minutes before the interval; Bobby Dormer heading home from a corner amongst a pile of bodies. Just before the whistle for the break Camberley went close again when from an Ellis throw, Luke Badiali was forced into a fine diving save.

The second period followed the pattern of the first with Camberley pressing forward but with City looking to counter. Early on Luke Badiali saved well from a Jamie Hoppitt effort, whilst City made a fine break on 56 minutes that saw Romaric Logon break into the right edge of the box. Instead of taking a shooting opportunity, Logon unselfishly laid the ball across goal but Curtis George was unable to make good contact. From the resulting corner Martin Dynan’s saw a header clear the crossbar but the longer the game went on it seemed that the home side would get something out of the game. For Camberley Dale Webb headed over from another long throw, and on 73 minutes, breaking after another throw, City’s Romaric Logon nicely turned Carl Garstang just outside of the box. With the way open to goal Garstang hauled back Logon and was a shown a yellow card, but the decision could easily have seen the Camberley full-back shown red. From the resulting free-kick Sanchez Benali hit a low effort just wide of the post. It was on 78 minutes that the visitor’s winning goal came, and predictably it was from yet another long throw. An initial clearance was made to the edge of the box where Matt Bunyan fired goal ward. Luke Badiali saved the powerful effort but couldn’t prevent Perry Coles turning the loose ball home. Try as they might, despite some late corners and free-kicks, City couldn’t fashion a clear opening but despite the defeat they will go into their summer break contented that they gave their all against their promotion chasing opponents.